Here in opposite land, it’s summer that requires the most gear for dog walks. If we have an emergency, it’s most likely to be heat stroke related. In general, the word of the season is caution. I avoid the heat of the day or anything with extended sun exposure. I don’t let Silas run unless we’re almost back to the car. I set sensible limits on how long we’re out.

I also carry a different set of gear, which I thought I would share. Keep in mind that it is hot, so our outings are usually short. My list is not intended for serious backpacking or even long hikes. 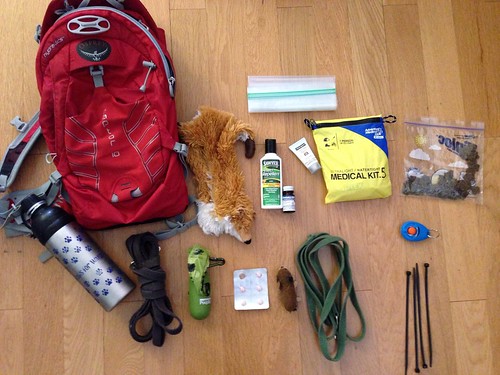 The pack itself is an Osprey Raptor 10, which I got on a screaming deal when Osprey did their last redesign of the line. It’s designed for mountain biking, but Osprey makes great packs in general. Because this is made for active use, it’s pretty well ventilated in the back, which makes it bearable. Most importantly for my repurposing, it has a hydration bladder that holds three liters of water with a handy drinking tube. I can put out a pretty good stream of water from the tube, but I have thus far been unsuccessful at getting Silas to drink it. That’s why the other main feature is Silas’s beloved Paws for Water bottle. I wish this bottle were smaller, honestly (and that it didn’t randomly leak), but at least I never have to worry seriously about Silas running out of water. Most importantly, he drinks from is more readily than he does from a portable water dish, so I suck it up.

The other things here fall somewhere between generally useful and extremely overcautious. Moving roughly from left to right, we have
1) a 15 foot leash for playing around
2) a very old stuffing-free toy that Silas will play with outside
3) poop bags in a handy clip container
4) Quart sized freezer bags, to make sure that said poop bags don’t leak inside my pack
5) A lotion-style insect repellant. This one has DEET and is NOT dog friendly, but I can use it without risking Silas sticking his head in the over spray. If Silas were more of a licker, or the mosquitoes here were less horrible, I’d switch to something less toxic.
6) Iodine tablets, which are really, really overkill
7) A travel-sized tube of sunscreen. I’m always coated head to toe, so this is just for touchups.
8) A packet of Silas’s stomach medicine
9) His most beloved tiny toy of all time
10) A basic medical kit. This one is mostly bandages and a few medications. For longer expeditions, my husband has a bigger pack and carries more extensive medical supplies.
11) A short back-up leash
12) A ziploc bag of treats. On longer outings I carry more than pictured.
13) A clicker, just in case a good training opportunity arrives. (I rarely use the clicker at home, but it seems to help Silas focus outside.)
14) Zipties. These are left over from the pack’s mountain biking days, but I keep them in case a harness buckle or leash clip breaks.
15) and 16) are not pictured because Silas stole them before I could get the picture–a soft floppy frisbee and the world’s loudest squeaky ball. The world’s loudest squeaky ball is a pretty good emergency recall aid.

As you can see, the emergency I’m most prepared for is being overtaken by the urgent need to play a game of tug. We do a lot of play-sessions at the park as a way to help Silas get over his fear of strange places.

Notable things that are missing include dog sunscreen and insect repellant. Silas is terrified of things that spray, so I’m still looking out for a good solution. My bandana has gone AWOL over the winter, and I’m all out of human trail snacks.

What do you carry in the summer? Is it different from your winter gear? Am I missing something on your essentials list?