Can I just say that my dog-laziness has reached new lows? 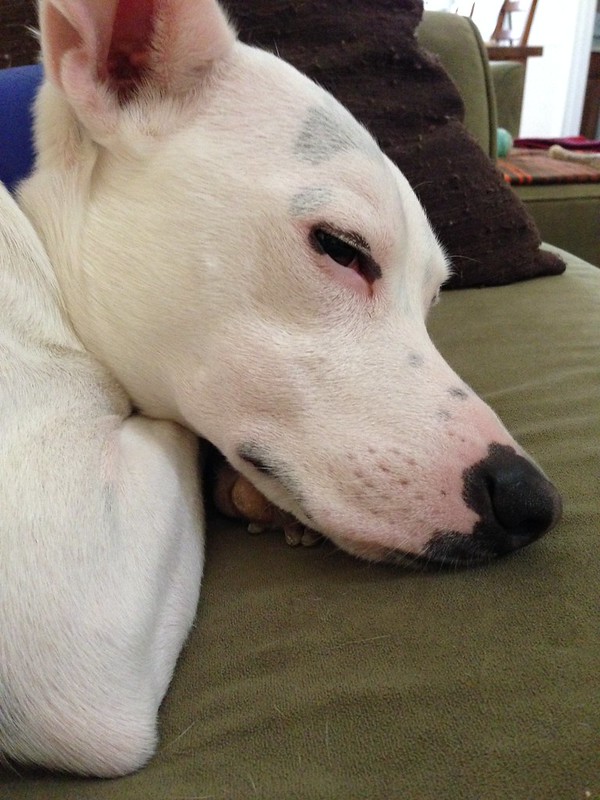 Silas is getting somewhat closer to going back to the park, but I don’t want to do too much too fast. So, a few times a week we walk around the block. Halfway around. More like a quarter, in fact.

In the evenings, Silas wants to play, but he generally prefers to do his pure playing with my husband, who is faster. If I throw Silas’s toy, he’ll take it back to K. So there’s that. I do some, but not that much.

What he wants to do with me is our mix of play and training. To which end  we were enrolled in three online dog training classes, two of which ended just last week. Three, by the way, is too many. Do not get grabby hands with these things or you will burn out.  I’ve, umm, downloaded all the assignments. For one class I did two out of twelve before resorting to the internet version of cramming them all in a drawer. For the second, where the exercises don’t really build on each other, I made a deliberate choice to get more proficiency per-exercise before teaching the next one, so we’re also at something like two out of ten. The third class? It’s long-term, and I haven’t even logged into the website in two weeks.

Cue me, hanging my head.

This is a problem I have a lot, in fact. I’ve even written about it here a few times. I will devote a lot–presumably too much–energy into being the “perfect” dog trainer for a few weeks, and then for the next few I just can’t be bothered. Something will happen to remind me of how really, really messed up Silas is (this time it was the car thing, followed by the exterminators, followed by my out-of-town BFF having to stay at a super-sketchy hotel near the airport because I can’t let anyone in our house), and it lets the air out of my little balloon. What difference does it make if Silas can execute a perfect foot target?

The difference, of course, is that his way-too-smart brain needs something to do with itself, and training is quite literally all we have. That’s not exactly motivating, though.

How do you get your dog mojo back, when things are a little stale?