Oh, we had a rough week last week. The cats. The regular landscapers. The gutter cleaners, who came a week early and walked on the garage roof. We had more level 4 outbursts (on a 1-5 scale) this week than we’ve had in a long time.

But, there was some good stuff, too. Life (and Silas’s nerves) settled back down from Thursday on through the weekend, during which all of the following happened:

–I finally found a vitamin that Silas is not immediately disgusted by. If he’s still eating it next week, I’ll give you all the details.

–Silas’s beloved neighbor walked by on the sidewalk just as we turned in the gate from one of his mini-walks. He went back out the gate to meet her. I can’t even tell you the last time Silas went out the gate. He was probably less than eight or nine months old.

–The next night on our sidewalk walk, when we got to the front gate there was an elderly pug walking our way. I deliberately take Silas out between after work walkies and bedtimes walkies, so we haven’t actually met a dog on the sidewalk in ages. Silas really wanted to meet Mr. Pug. I asked permission, we did a quick sniff, and then Silas was so excited he accidentally walked at least fifteen more feet down the sidewalk. Fifteen feet past the gate, people! He’s also starting to linger at the gate instead of bolting through, presumably because the hedge corner by the gate is the neighborhood’s most happening pee spot.

–Silas got in the car with zero drama, so we went out for ice-cream. (I got an extra cup and gave him a spoonful of mine.) Silas found this acceptable.

Can we rest now? 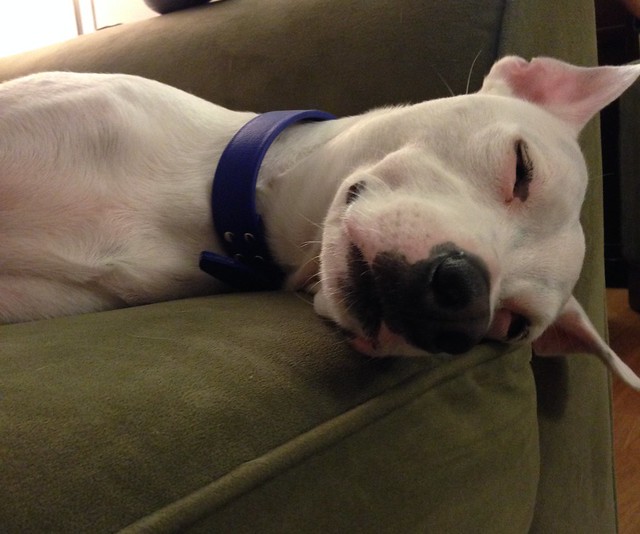