I don’t review a lot of products here anymore. We have a pretty comprehensive collection of well-made, long-lasting toys. Silas doesn’t eat a lot of new foods. I try my best not to buy him things just to buy them.

At the beginning of August I ran across an entire new toy company, though, and I couldn’t resist.

I bought two of them: 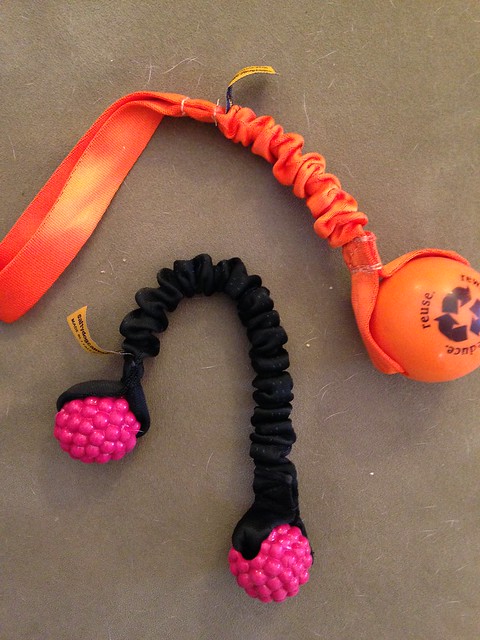 (Yes, my photo backdrop is covered in dog hair.)

I love these toys. Both of the ones I bought are a Planet Dog toy attached to a bungee handle. I am a big fan of Planet Dog. Alas, we play all of our fetch indoors, which means that rubber balls either bounce into or roll under something they shouldn’t. Attach that same ball to a bungee handle, though, and it can’t roll under the sofa.

The more tug we play, the more sold I am on the bungee tug. When you have a smaller dog and slippery floors, it’s easy for you to do all of the tugging work, while the dog just holds on and slides around. A tug toy with some stretch not only offers you some shock absorption, but it also guarantees that the dog does his share. You really want that pull back in order to get the strength and balance benefits of playing tug. If you have a larger dog, I suspect that the same dynamic works the opposite way. Unlike some wimpier toys we’ve tried, these have a good, strong stretch.

I should also mention that the nylon handles on these are much more comfortable to hold than our other toys. This is a high quality fabric, with none of those scratchy nylon edges.

I wouldn’t leave these around for the dog to access unsupervised. These particular Planet Dog toys are not rated for extensive chewing, although Salty Dog does use some of their stronger toys in other models, and any determined dog could cut through the nylon handle. I have to be particularly careful with the  raspberry model, because Silas thinks the berries would be a lot more awesome without the handle. That said, they’re showing zero wear so far from vigorous tug games.

For those crunchers out there, Salty Dog also makes great faux-fur pockets for water bottles on a similar stretch handle. In fact, no matter what your dog is obsessed with (tennis balls, squeakers, braided fleece), Salty Dog probably makes a toy they would like. For good or for ill, that includes a small number of real fur toys.

I bought our Raspberry and Orbee toys at a small retail store in Canada, but the website does ship to the US.