Last week one of my commenters mentioned being overwhelmed by picking a tug toy for her dog. There are lots of choices out there. Today I’m going to talk about our favorites. Later in the week I’ll be posting some things to consider as you look for your own.

Silas, let me just say, is an equal opportunity tugger, as you’ll see from his bizarre collection of favorites.

(Not pictured: packing tape, preferably just pulled off a box; twisted up bits of brown paper bag; and real sticks, which I only allow in park emergencies.)

I rummaged through our collection and pulled these out as the best of the best: 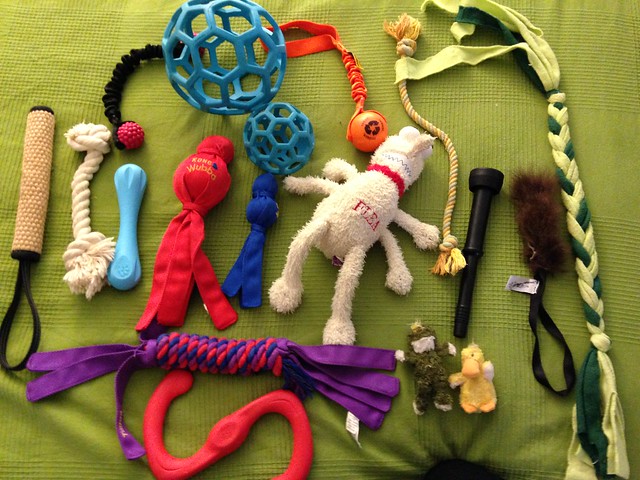 I thought I would be able to number these. It turns out that I’m not that patient. So, working roughly from top to bottom, left to right:

2 and 3. J.W. Pets Hol-ee Roller, big and little I don’t think these are officially a tug toy, but they’re great for it. I can see them being especially awesome if your dog tends to get your fingers instead of his toy. You’ll notice that we have lots of toys in two different sizes. 30 pound dogs apparently aren’t a marketing niche, so we usually have to pick between too big and too little.

5. A random rope toy. This used to have rubber chewy parts on it. I untied the toy years ago and got rid of the rubber bits,  and then used this nice length of skinny rope to teach Silas his “out” cue.

7. (Onto the second row now) Jute Bite Stick with Handle. Silas was mad for this, until the jute started to get a little hairy. Now he’s more so-so. But if you have a dog who seriously bites down, you should give this one a try. Sturdy with a great handle.

8. Another random rope toy; I believe this one is Pet Co’s Organic Cotton line. Looks boring to you; Silas loves it.

9. West Paw Hurley. This one is the large size. We also have the small one, buried in a park bag somewhere. Silas is only okay with the small one because he has excellent mouth placement on the toy. If you have a big, indiscriminate dog, even the bigger one might be a little short. I like these because they have just enough flex.

10 and 11. Kong Wubbas.  A classic for a reason. I can’t remember if our big one is the Large or the X-large. It’s almost too big for Silas to hold. The little one is tiny, and he adores it.

12. Flea Toy, a gift from my mom. I’ve seen these in stores, but I don’t know the brand name to look it up online. I can put Flea Toy on the ground and waggle his legs, and Silas just goes crazy. It’s held up to this surprisingly well, but Silas isn’t that hard on his toys.

13. The Udder Tug. There are not words for how much Silas loves this thing. It’s probably his favorite toy in this pile. Warning: these are recycled from the dairy industry, and they will smell exactly like a cow barn for quite a while. Strongly. But it’s a great toy.

15. Kong Tugga Wubba. This one is Tugga Wubba 2.0. I bought the bigger one this time, hoping it would hold up better, but it hasn’t really. It’s also a little too big. I’d say get the small size for dogs Silas’s size and under and save the big one for dogs over 40 pounds.

16 and 17. Tiny Kong plushies. These are really pushing the boundary of tug toy. Silas’s favorite toy on the entire planet was a little beaver from a hide-a-toy. When I went to buy a new version of the hide-a-toy, and thus secure two backup beavers, it had been remodeled to include squeakers. Squeakers meant we couldn’t use them in obedience class. I bought these (with removable squeakers) instead. These are seriously only about two inches long, but they’ve held up pretty well. Silas has a preference for the frog, probably because he has legs to pull on.

18. West Paw Bumi. Another toy that we have in multiple sizes. This is the larger one, which is (again) really a little big for Silas. I’m not sure where the smaller one has gotten off to.

10 thoughts on “Our Favorite Tug Toys”