As promised on Monday, here are some questions that can help you pick a better tug toy for your dog. I don’t think I’m capable of writing the “ultimate guide to tug toys,” but there are definitely some common problems that good toy selection can help you with.

First up, let me say, I am neither teaching you how to play tug with your dog nor debating if you should do so. I’m assuming that you have a dog who is a pretty good candidate and that this is a game you want to play. I strongly recommend that you make some rules to govern tug games at your house, but that’s not the point of this post.

Secondly: I will tell you that Silas thinks every toy ever invented is a tug toy. Feel free to be inventive. 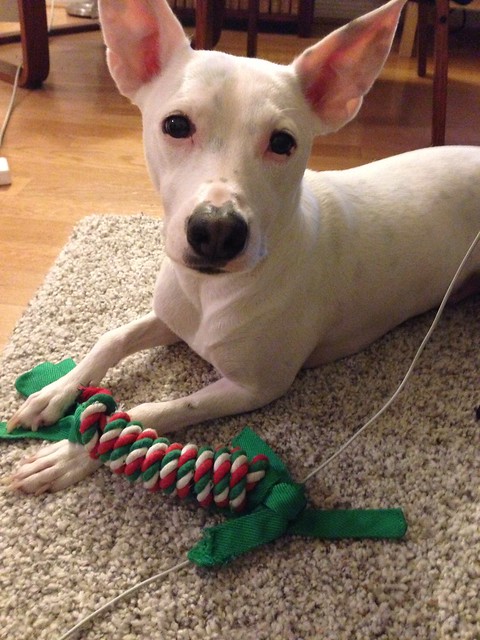 Question 1:  Does your dog spit out the toy when you ask for it? If not, you need a toy that you can physically control. You will never get a stretchy toy away from a dog who won’t let go on cue. There are lots of tactics for teaching the dog to give back the toy, but for any of the ones I’ve seen you need a toy that you have full control over. Good options will probably seem very boring to you–rope toys, fake sticks, fire hose bumpers, etc–but dogs who won’t let go already have plenty of value for the toy.

Question 2: Does your dog sometimes grab your hand instead of the toy? I said that technique was outside of my range here, but do be careful with how you are presenting the toy. It’s easy to angle the toy so that your hand is more tempting than the toy is. Also, have some rules about this. Your dog will pick it up quickly. Generally, though, you’ll want a bigger, longer toy. Give the dog lots of room to grab as far away from you as possible. Silas loves to play tug with his huge Hol-ee Roller ball, which I think would be great here. 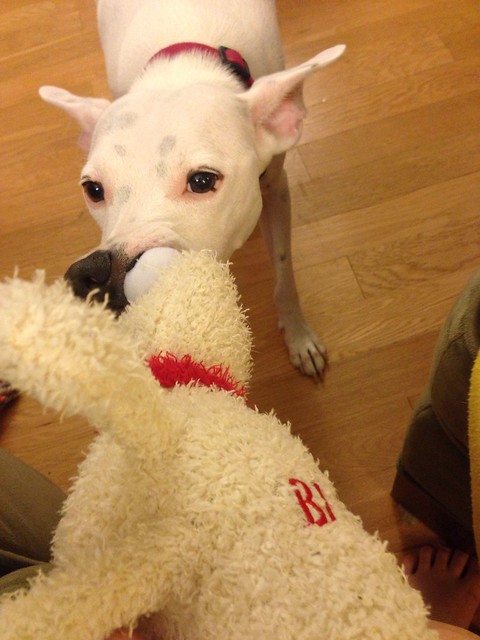 Question 3: Does your dog clamp down firmly enough on the toy? Some dogs who aren’t really that excited about tugging will just let go of the toy when you pull. That’s a different problem. But it’s also easy to get a toy that’s just challenging or unpleasant for them to hold. The jute toy that I showed on Monday was a lot more fun for Silas before the jute got prickly. I’ve seen a lot of tug toys lately that are going to be too large for most dogs to get a good grip on. If you aren’t getting a solid bite down, try to find something your dog will enjoy having in his mouth. A softer toy that isn’t overly large will probably serve you better. Which leads to:

Question 4: What size toy do you need? There are several angles to this one. A lot of our favorite tug toys are for smaller dogs, because we just don’t have a lot of space. A four foot fleece rope means that Silas backs into the furniture and scares himself. That said, not all smaller toys can handle the force generated by a larger dog. If you have a small dog, a longer toy is easier on your back and can keep you from looming over the dog while you play. A larger dog may get too much leverage with a long toy. Sometimes you need a toy you can hide in your pocket, while sometimes a big toy can help your dog’s attention.

Question 5: Is your dog going to destroy the toy, or play thirty minutes of keep away, if he gets it away from you? You’ll want to address that behavior no matter what (playing tug on leash is a good place to start), but in the meantime look for a toy with a good handle. You want to keep a good grip on the toy. Also, see question one about picking a boring toy. 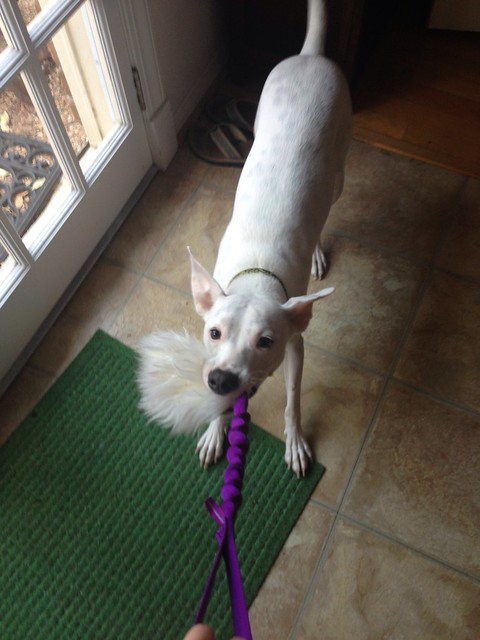 Most importantly, Question 6: What does your dog love? Toys that you can waggle on the floor for maximum pouncing? Toys that are good for fetch afterwards? Fuzzy things? Are noises awesome, or terrifying? Beyond a certain point, that’s all that matters.

12 thoughts on “Picking a Tug Toy”