But, we also have official goals this month.

Nineteen of them, in fact. 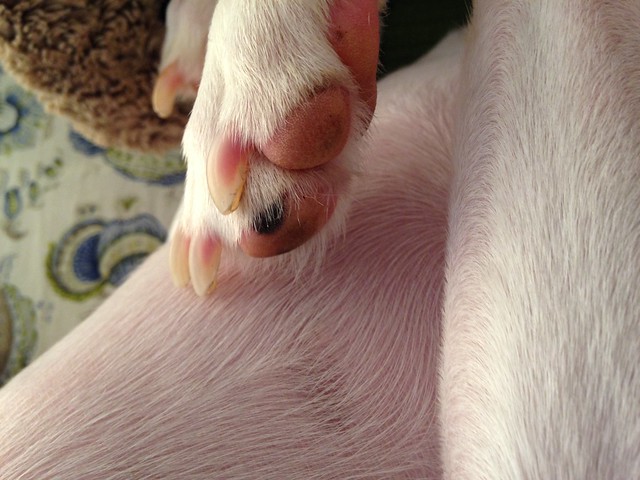 Yep, that’s a real-live, just-taken photograph of how horrible Silas’s nails are.

Silas hates having his nails done. Like a lot of his handling issues, we’d settled on the pragmatic–do it fast, get it done, have a party afterwards. Because Silas’s very first stress response is to stop eating, he’s tricky to counter-condition with food in the moment. But while the post-procedure party worked wonders for bath time, nail trimming was just not improving. Then, for reasons that are only reasons to an anxious dog, it started getting worse.

Now Silas has determined that he will not be put on the table, then only place he didn’t squirm too much for me to safely trim. It wouldn’t be too important, except that Silas spends very little time walking on concrete, so his nails grow quite quickly.

That means my big October goal is to counter-condition the process of nail clipping. I really hope it doesn’t take all month, but it may. Past attempts to work through this have always hit a plateau somewhat before actual clipping can happen.

I had this post largely drafted yesterday, when I heard that Dr. Sophia Yin had passed away. I’m incapable of writing a tribute that can do her justice, but this post is very much in her spirit. Dr. Yin cared deeply about how dogs and cats felt about being handled during grooming and medical procedures, and she used her position within the veterinary community to both advocate and educate on their behalf. I can’t write her an appropriate tribute; I will try to practice one instead.