While I let Silas off the hook of being “perfect” years ago, I have a little harder time with myself.

Which is why I’m here to remind you that you are going to make mistakes with your dog. It’s not a question of “if,” it’s a question of “when” and “what do I do now?”

Every dog trainer makes mistakes. For those of us with less well-balanced dogs, it’s painfully obvious when we screw something up. Anxious dogs have long memories, and they seldom “get over it” no matter how much time you let pass. Overestimate their abilities to handle a situation, and you can undo a lot of hard work.

It’s easy to say “be more careful,” and then beat yourself up when something goes wrong, but that doesn’t help you or your dog. 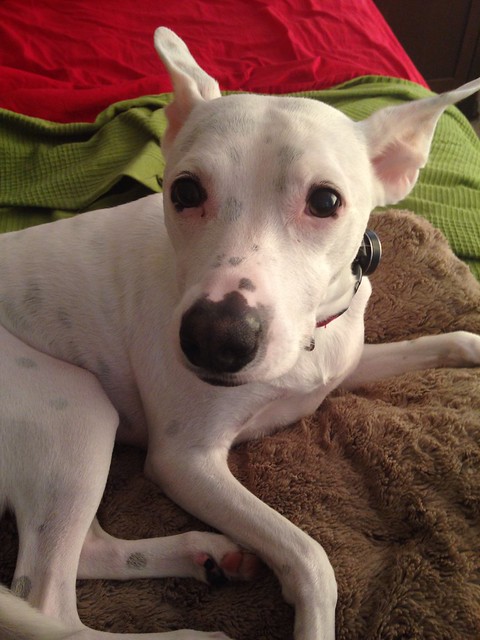 Here’s my example from today:

Silas and I were playing a retrieving game. It was going great.

Then it went off the rails. First, I got greedy. He was having so much fun! It was our best retrieving in months! So I thought “Let’s do just one more!” (Pro tip: train yourself to say, in response to that little voice, “Nah, we’re good.”) Except the one more was really slow and kind of bad. “I don’t want to end on that! I’ll do one more, so we can stop on one of the great ones.” DANGER. ABORT MISSION. The last retrieve was perfect! I was so excited! I threw a big excited party, like all those trainers tell you to!

Except noise-sensitive Silas, focused on the second ball I was holding, wasn’t expecting a big party. He dropped his poor ball like it was a hot coal and cowered in terror.

Now, despite my best efforts at damage control in the moment, he is apparently terrified both of his ball and of bringing me things. (Yeah, this is really going to be a big setback on the retrieve front.)

And here’s where letting go of perfection is useful.

Instead of wallowing in self pity (although I might have, for just a minute, and that’s okay too), I am making a plan. When Silas wakes up from his nap, we’re going to do some hand-touches with high-value rewards. The absolutely most important thing is to make sure that he doesn’t get skittish about running up to me, so I’m going to go back and re-invest heavily in that step.

I’m also going to do some free-shaping games with the offending ball. (Depending on how this goes, I may change over to a different ball, but I don’t think he’s quite that frightened.) We’ll progress from there back to the retrieve game only once he’s comfortable with the toy again.

In a completely different context (probably with his favorite tug) I am going to work on his tolerance for sudden noise while he plays, just in case I forget myself in the moment again.

You’re going to make mistakes. Accept it, let it go, get on with a plan.