I didn’t mean to go so long without posts–and many thanks to those of you who sent me concerned e-mails. It warms my heart.

I haven’t been posting because life is very slow and boring here. Which is not complaining, by the way. Boring is one of my favorite things in the universe. It just doesn’t inspire a lot of exciting blog posts.

So, here are some musings of a not-earth-shattering variety.

1) I have decided that I’m going about Silas’s nail trimming all wrong. Silas is a dog who adores–and NEEDS–process and routine. I keep trying to do wait until he’s calm and happy, then whip out my nail clippers for a little counter conditioning. He is never going to be okay with that. Surprises are his least favorite thing in the universe. Instead, I’ve decided to make the whole process as he already knows it less scary for him. We trim his nails with him standing on the kitchen table, where I can see what I’m doing and he doesn’t squirm. Instead of conditioning the clippers, which is getting me no place meaningful, I’ve started working on the other part–picking him up and putting him on the table, then letting him get back down. Or, even just picking him up and putting him right back down, then giving him a big treat. I wish I could train him to put himself on the table, but I’ve never been able to manage it. I can’t even say how much better it made bath time when he learned to get in the tub on his own. Standing him on the table is hardly the most sensitive and humane way to do this, but it’s what he knows. That goes a long way with Silas. Basically, I think the best I’ll ever be able to do with him is to make him as happy as he is at the vet, where he loves everything except the actual exam.

2) I have realized with kind of a dull sense of dread that we’re due back at the behaviorist in January, and she’s going to ask lots of questions like “did you finish the relaxation protocol?” and “how many times a week is he getting out?” Gulp. I guess I need to start doing “real” training again.

3) I put a new thermometer on the end table on Wednesday. Silas sniffed of it and walked on by. This counts as progress.

4) Our winter weather is a fickle, fickle beast. It’s never colder than about 30 degrees here, which probably seems warm to a lot of you, but our house is exactly the opposite of everything warm and snug. Poor nearly-naked Silas was miserable last week when the temperature inside the house dropped from 75 (our summer air conditioning setting) to 65 in the span of one day. This week should be warm again; maybe Silas’s winter coat (to the extent that he gets one) will come on in. He has a sweater that he hates. If any of you have great ideas for keeping a short-haired dog warm, please let me know. He’s all warm and happy in this picture, which is how he stayed until he stood up and realized that his sweater was attached to his body OMG I HAVE TO SCRAPE IT OFF NOW BEFORE IT KILLS ME. 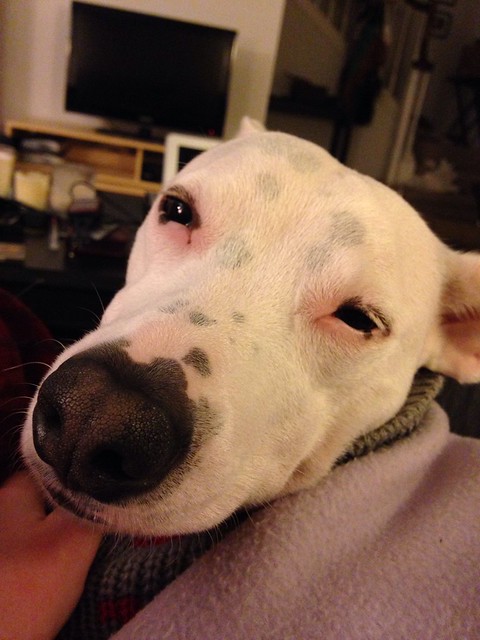 9 thoughts on “Puttering Along”