I approach the Fourth of July with a dose of skepticism every year. A year is a long time for a dog whose emotional responses to stimuli are still in a state of flux, so I have no expectations. Silas was a tiny baby puppy on his first Fourth. His second fourth was No Big Deal, something that surprised me at the time. Last year, he barked at the fireworks. This year, our first with his medication, I really wasn’t sure what to expect.

We’re in a good place and a bad place for fireworks–good because we aren’t in the kind of residential area that lends itself to neighbors with firecrackers all night, but bad because we’re quite near two large displays. 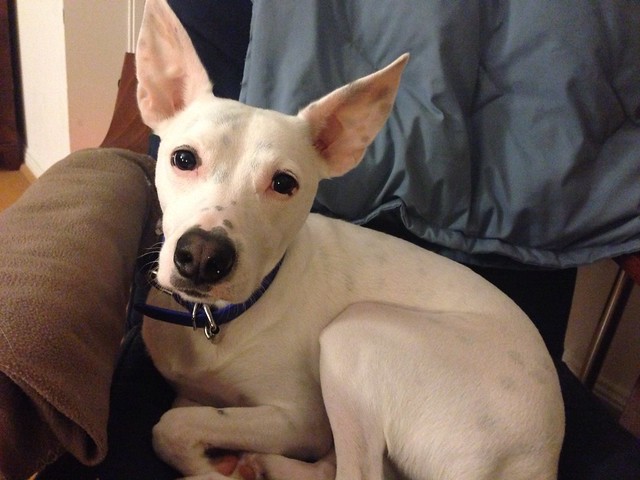 This year I weighed my options and decided to start off the day quite early, with a trip to the park. It was a calculated risk. Going to the park is stressful for Silas, even if he has fun once we’re there. I was really pleased that he got right in the car, and then he seemed to enjoy himself while we were there.

After a nice dose of exercise, we spent the day pretty much as normal. We’re in a bad pattern of strong afternoon storms, so there was some thunder around 6:30. At that point, I went ahead and gave him his short-term anxiety medication, just to be on the safe side. Then we had fairly close fireworks from 9:00-9:15, and further-away-but-still-loud fireworks about half an hour later.

All in all, it wasn’t too bad. Silas had some trouble with the thunderstorm, which was extremely loud, but after a few minutes he settled down. The earlier, closer, fireworks show also gave him some trouble. The Kong I had hoped would get him through wasn’t good enough, so we resorted to good old classical conditioning. Boom=delicious cheesy treat. By the end of the display, he was resting calmly near me, with a relaxed expression. The second display didn’t seem to bother him at all. I probably should have used the cheesy treats through it, too, but I didn’t want to make it into a bigger deal than he did.

How did you all fare?