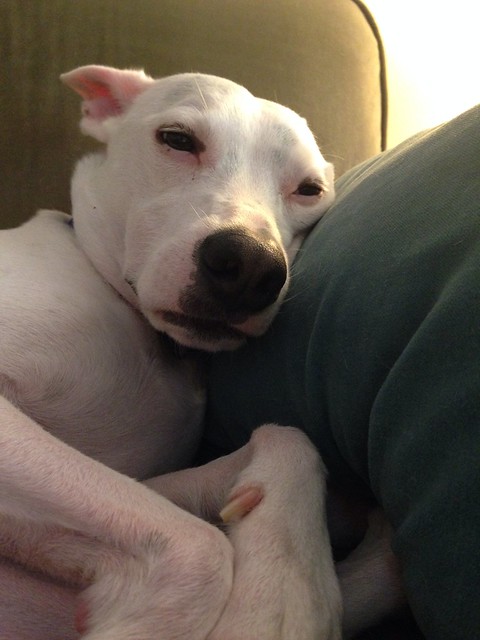 I bought Silas one of those Whistle dog activity trackers. If you haven’t heard of these, they’re like a dog Fit Bit. They use an accelerometer mounted on your dog’s collar to tell you how much time per day your dog spends moving. (I paid for this myself. Why does nobody ever ask me to review things I actually want?) I think this makes me the biggest yuppie in the history of the world, but whatever.

Any day now, I’m expecting the founders to e-mail me and say “Umm, did you really install that correctly?”

Because Silas doesn’t go on walks of any duration (his grand sidewalk excursions, of which we are mega-proud, last about two minutes, and we’re just now making real headway on the car thing), I set his goal at thirty minutes a day.

In almost a week, he’s hit this goal one time, although in my defense he’s gotten close on a few other days. The app suggested that most dogs his size get at least an hour.

I have a few theories kicking around about what’s going on:

1) Because we’ve been virtually housebound for months now, Silas is out of shape and lazy (like me). Or, he’s just adapted to our easy-does-it lifestyle.

2) When I trained him not to pester me with a toy all the time, I did it too thoroughly. Because he’s not pestering us, we assume he doesn’t want to play. Evidence for this one: he’s quite happy to engage if I get up and grab a toy.

3) Age and wisdom. I think three is a little young to slow down quite this much.

6) Over-medication. I’m hesitant to blame his medication, not only because he’s been at this dose for a while but also because he is quite perky when he’s not asleep.

7) Last week was atypical. Which it was–I trimmed his nails twice and he went on two car rides, both of which are the kind of mental stress that disproportionately wears him down.

8) Our indoor play is a lot more vigorous than a leisurely trot around the neighborhood. Since, unlike the people trackers, the dog tracker only measures moving time, short bursts of intense exercise aren’t rewarded. I’m not sure what the appropriate conversion metric would be.

I’m going to keep an eye on him for a little longer before I start to get really worried. In the meantime, how active is your dog?