Every year in August I go back home to take my nephew out for a fun day before school starts. This year I went slightly early, and I didn’t take Silas.

The whole thing was a little last minute, for complicated but very mundane reasons.

Silas was, ostensibly, fine. Separation anxiety is not one of his many problems, for which I am deeply thankful. He greeted my husband happily every evening, they played, the usual stuff.

Nothing seemed the least bit off when I got home on Friday. Then, Silas was outside alone when my neighbor came home on Monday night. He barked a few times. He almost always barks a few times at this. Our last neighbors left the house vacant for a few months, and he’s never forgiven the new neighbor for moving in. I went out an collected him, as I always do, because I don’t want to be “those people.”

That’s when I noticed that something was different. Silas has always settled right back down after these sessions. Unless there’s a cat or a squirrel, as soon we we’re back indoors he’s normal again. This time he paced, and whined, and barked. He would calm down for a minute, and then he would gradually work himself back up to full-on barking. I would move him away from the door, he would seem okay, and then he would start barking again. In desperation, after ten minutes of this, I put him in his crate, where he finally settled down. This whole thing had me deeply confused. He hadn’t even been really upset outside; just garden-variety alert barking. 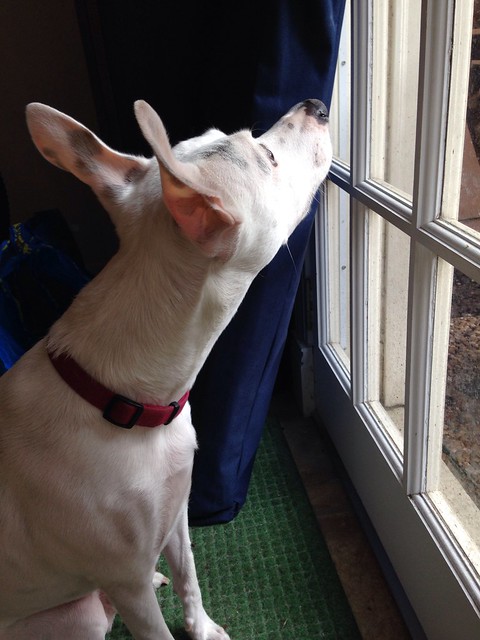 Then the same thing happened Tuesday morning, except Silas wasn’t outside. He saw something, probably a bird, started to bark at it, and then he barked off and on for at least twenty minutes. Even when he was finished barking, he wanted to lie down facing the patio door, where he could see out.

Finally, I realized what had happened. My other neighbor has a huge Crepe Myrtle tree that’s right against our fence. (I am not complaining. Without her tree, our patio would be like the surface of the sun.) Every year, she has to have it trimmed back, because the branches rest on our garage roof. I let Silas out, happened to look up, and realized that all the low-hanging branches were gone. We have a perfect view of these branches. If the picture above were from Silas’s perspective, that’s what you would see.

Less than one week, people. I leave town for less than one week, and my neighbor has her trees trimmed and now we have a new phobia. I can only hope that this is one of those fixations that will fade in a few days; you never can tell with Silas.

9 thoughts on “I go out of town for five days, and this is what I get”